From its humble beginnings as a student project at Chalmers University of Technology in Gothenburg, Sweden, today RTI Group, headquartered just outside the city, is a world-leading manufacturer of X-ray quality assurance (QA) solutions.

With the 1981 launch of its DIGI-X, the first commercially available multimeter to measure non-invasive kV, the company would create an entirely new industry in X-ray QA.

A major rebrand in December 2019, launched to great fanfare at that year’s RSNA Annual Meeting in Chicago, USA, coincided with the company’s mission to ‘set the standard for quality assurance in X-ray imaging’ through significant investments and expansion of its research, sales, service, and training facilities.

With forty years of R&D expertise and an impressive portfolio of world “firsts” in both hard- and software, such as the Mini-X, PMX-II, Barracuda, and oRTIgo software, RTI’s solutions today of the Piranha and Cobia meters are used worldwide by hospitals, major manufacturers of X-ray equipment, service providers, and government authorities.

This year’s launch of the RTI Scatter Probe, a revolutionary design of leakage and scatter detector in one, and an upgraded version of its industry-leading Ocean™ software, Ocean Next™, are both eagerly awaited by users.

It might have all been different, though, if the company’s co-founders Lars Herrnsdorf and Ulf Toll had continued their research & development in alternative energy sources.

The first company they formed, Innova Electronics, emerged during Sweden’s energy crisis when the country’s oil dependency and supplies were severely affected by conflicts in the Middle East at the beginning of the 1970s.

“The first product was a wind speed meter system used to evaluate places and see if they were suitable for wind energy production, that we had developed during our studies at Chalmers University,” explained Ulf Toll, RTI’s Concept and Feature Leader.

Lars, who retired from RTI in 2019, accredits their transition to X-ray safety and subsequent decades of research to a combination of research articles, international regulatory agencies and institutes, and key figures and mentors in the industry. These factors enabled Lars and Ulf to evaluate what the market required.

“RTI started from a science article about how to make an electronic penetrometer,” said Lars, “it is still important for us and the success of the company to publish our new developments in academic publications where it can be accepted by big influences and key customers,” he added.

The prototype DIGI-X, eventually launched in 1981, was developed during the introduction of increased regulations worldwide for regular QA of medical X-ray systems used in hospitals. It would be the first commercially available multimeter to measure non-invasive kV.

“The timing was good for this type of solid-state product,” said Ulf, as it addressed the need for a small, rugged, and sensitive dose detector as an alternative to the ion chambers used at the time. 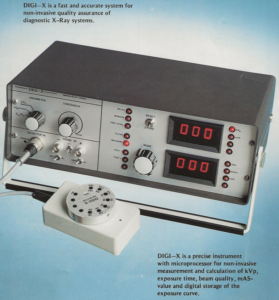 Hans Forsberg Ph.D., responsible for X-ray QA and service at Karolinska University Hospital, then the biggest hospital in Sweden, was particularly significant to the early development of the company.

“Due to good contacts, the DIGI-X was quick to be demonstrated in nearly every Swedish hospital by Hans Forsberg, and then, soon afterward, in Germany with the assistance of a network of sales representatives and the brand Philips,” declared Lars.

Although they both agree that the overall response to the DIGI-X was very positive, there were doubts within the industry about the use of solid-state probes.

Lars explained: “It was a slow start in the US, where they were more conservative and continued to take measurements with ion chambers.

“Consequently, the solid-state technology we had started and continued to develop for dosemeters had a lower acceptance at first since it was a new technology .”

However, following the introduction of the MINI-X, the first self-contained kVp/time meter, at the US Food & Drug Administration (FDA) in the mid 1980s, “word started to spread about the RTI brand,” said Lars.

Lars also attributes the early subsequent growth in the US to the personal contact with and important feedback from IEC dosimetry/CT working groups within major manufacturers.

Ulf explained: “The US market has always been very important to us and it is necessary to have a close representation there.

“We felt we were too far from our American customers, so we didn’t hesitate when the opportunity arose to acquire our then US distributor to form RTI Group Inc,” he continued.

Since its formation in 2005, RTI Group Inc., based in Towaco, NJ, is now one of the most respected and reputable brand names in the US X-ray QA market offering sales in every state and service and calibration of RTI’s trademark solutions in its ISO 17025 accredited labs.

After the release of oRTIGo, the impact of software in X-ray QA was not lost on Ulf who, while visiting a major X-ray manufacturer in Salt Lake City, declared that RTI software should be the new Windows OS for QA.

To date, RTI has accomplished a further two major software launches since oRTIgo in 1991, with a third, Ocean Next™, due for release this year offering workflow, automatic tests, traceability, and Bluetooth connection to Piranha and Cobia meters. A different world to the great “leap” from ion chambers to basic solid-state technology in 1981!

oRTIgo software, launched in 1991, set the standard for the current Ocean Next™

However, by their admission, the industry was not ready for software in X-ray QA at the beginning of the 1990s.

“The X-ray industry was slow to catch up,” explained Lars, “service personnel had not been trained with computers and preferred simple units – even if it took three times longer.”

They continue to be at the forefront of research and development in X-ray QA. Age and time have not wearied them. Quite the opposite!

Lars, who obtained his Ph.D. in Medical Radiation Physics at the prestigious Lund University in 2018, believes further advances in microelectronics will allow for the creation of ever more sophisticated imaging and diagnosis equipment and software. The internet will also have an impact as it will allow increased and more accessible data storage.

Ulf, who continues to influence the major R&D projects at RTI, is more cautious. After forty years in X-ray development, he continues to see different legislation enacted globally, making the industry slow to develop even as new and upgraded QA technologies are released.

However, with its focus on “solutions” rather than meters, Ulf is adamant that RTI Group is best positioned to help customers improve their processes and be compliant with existing and future regulations.

“RTI has always been leading the development of X-ray QA and many times has introduced new and leading technology,” he said. 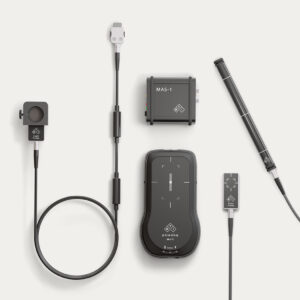 A great opportunity for a Software Developer with an interest in cloud technology, to join RTI Group....

Ocean Next™ software v2.0.2.0 is now available on the RTI Software Downloads webpage....

Make sure you are fully updated with the RTI solutions! Register today for RTI Academy training courses in September and October....

We use cookies on our website to give you the most relevant experience by remembering your preferences and repeat visits. By clicking “Accept All”, you consent to the use of ALL the cookies. However, you may visit "Cookie Settings" to provide a controlled consent.
Manage consentAccept All
Manage consent

This website uses cookies to improve your experience while you navigate through the website. Out of these, the cookies that are categorized as necessary are stored on your browser as they are essential for the working of basic functionalities of the website. We also use third-party cookies that help us analyze and understand how you use this website. These cookies will be stored in your browser only with your consent. You also have the option to opt-out of these cookies. But opting out of some of these cookies may affect your browsing experience.
Necessary Always Enabled
Necessary cookies are absolutely essential for the website to function properly. These cookies ensure basic functionalities and security features of the website, anonymously.
Analytics
Analytical cookies are used to understand how visitors interact with the website. These cookies help provide information on metrics the number of visitors, bounce rate, traffic source, etc.
SAVE & ACCEPT